Greetings! This month's theme for our Monthly Simlit short story challenge focuses on the horror genre and it immediately brought me back to a sim couple I submitted for TheSims Sparkd challenge Stylist entry. I grew up watching all of the old school slashers, ghosts and thrillers! I'm hoping to channel in all of that… END_OF_DOCUMENT_TOKEN_TO_BE_REPLACED

Winter in Hope Valley was a beautiful sight. The snow fell ever so delicately onto the plains of the frontier and coated the quaint little church and schoolhouse in a blanket of soft white flakes. It was a day like any other of the season and the children had gathered to begin their lessons.

Elizabeth Thatcher had moved to the small town to work as a teacher, something her wealthy family didn’t understand. She had many opportunities to teach at more prestigious schools, but she fell in love with the town and it’s residents from the moment she arrived.

The children adored her as well and their lessons with her were something that they always looked forward to.

This particular lesson was about fairy tales, specifically Elizabeth’s favourite. “Have any of you heard of a man named Hans Christian Andersen?” She asked her students who responded with shrugs and shakes…

I always knew I was different. Back in elementary school, other kids would call me “Elf”, “Pointy Ears”, “Freak” and all sorts of names. I was told that I had an ear condition that made my ears look pointy and I was forced to wear a uniform to school, which made me an easy target to bully.

The insults got worse each year. I later started wearing my hair loose to try and cover my ears, but they were too long and still stuck out. I begged Mother to send me to a surgeon to have them fixed. She refused and said that there’s nothing wrong with me – I just had to ignore the other kids.

Then I started having dreams. I dreamt of a beautiful place with lots of trees and even a waterfall. It was magical. A place I’ve never seen before, yet it felt strangely familiar.

The imagery here is magical! This story gets my vote, so good 🙂

This is an entry in Lisabee’s Monthly Simlit Short Story Challenge (forum). February’s theme is Fairy Tale. Thank you Lisabee for an awesome challenge as always!

Talia disappeared at the end of summer when they were 15. After a warm season filled with sunny fun, breathless whispers, and sweet kisses, they’d exchanged heart lockets.

Talia began acting weird. She was exhausted all the time. Her temper became short and she cried often. She said she couldn’t talk about it.

A year passed and a fresh summer began. Mizzi’s friends helped her heart heal, but she still thought of Talia and wore her heart necklace everyday.

Mizzi wrote in the sand: Talia, where are you?

“Looking for the lost girl?”

A woman wearing a headwrap seemed to appear next to her out of thin air. “A fairy took her.”

The pup is SO cute, their transformations were fun! 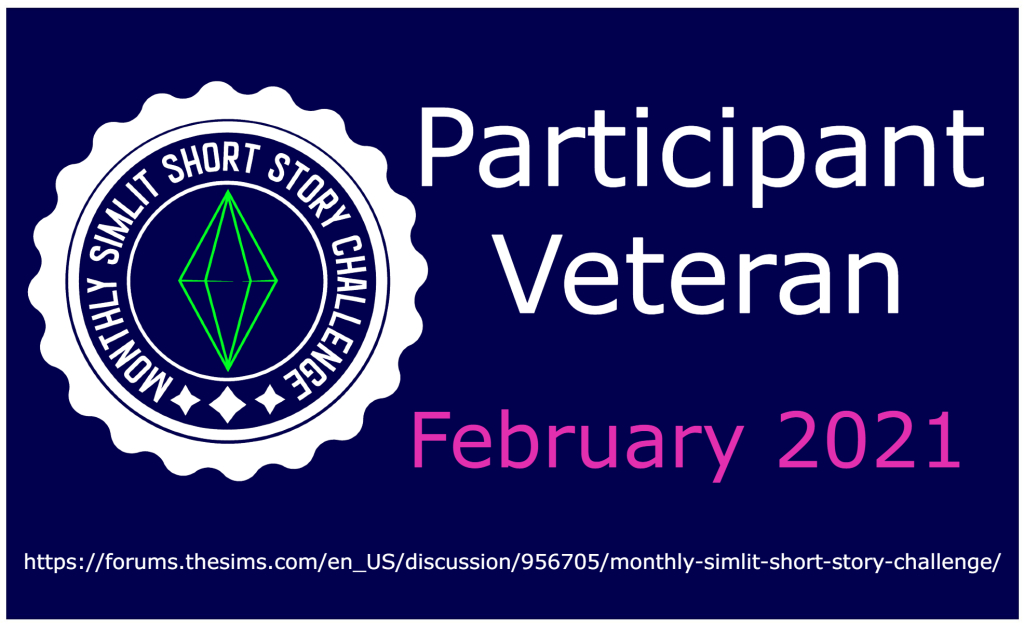 I’d like to you all to visit the link above.
Reason number one being I’d love if just one of you got inspired to try taking on the challenge. LisaBee does a lot of marvellous work to keep this challenge afloat and and she deserves all our support. Her work and each story submitted is part of keeping our beloved SimLit community alive and well.

Reason number two being that I’d be very happy if you took the time to read all the entries once they have been listed and then vote on your three favourites in each category.

Once upon a time, far away in…